Making Friends as an Adult: Why is it so difficult? 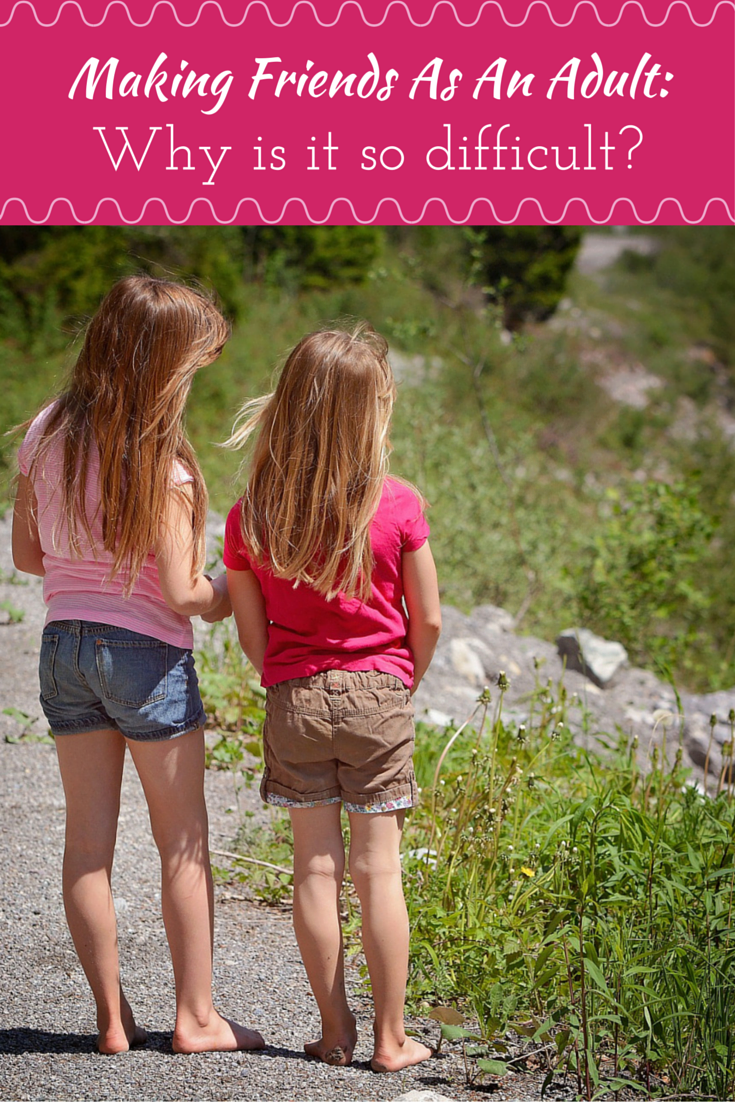 Remember how back in the day it was so easy to make friends? Why is making friends as an adult so hard? I distinctly remember the first time I “tried” to make a friend back when I was in 3rd grade. There was a girl in my class who was super cool. She wore Limited Too clothes and accessorized and read the Babysitter’s Club. In my circa 1993 mind, she was the bees knees. (For the record, we still keep up with each other on Facebook and she’s still super cool). So one day I walked in to the classroom, went over to her, and just started talking like I had known her forever. That was it. We were friends. Looking back now, there’s no way I could do that. Just go up to some random person and strike up a conversation? They’ll think I’m crazy. So what happened?

I think difficulty in making friends as an adult really comes down to difficulty meeting new people in general. We get so stuck in our own worlds and we’re all sorts of busy, so we don’t take the time to meet the people around us and make an effort to get to know them. Plus, we’re not going to be friends with everyone we meet. That’s OK!

We also seem to create rules for ourselves… that no one else knows about or necessarily follows. “It’s too soon to text her.” Really? Why? “I should keep that to myself. She might think I’m weird.” Well, if she does, do you really want to be friends with her?

School made for built in friends when we were kids because we had something in common – a class we took, a club we were a part of, or a sport we played. For those of us who went to college, it was a bit more difficult at that point because the class sizes were larger and there were all sorts of majors in gen ed classes, but that’s where clubs, sports, and Greek life came into play.

I’ve found myself lately wanting to grow new friendships with people. I think a lot of this has to do with the fact that I have a son and most of my friends don’t have children yet, so it’s nice to have people around who can commiserate. But it’s also just nice to meet new people. So I’ve been trying a few things to make friends as an adult. I know it won’t be an overnight process, but I’m noticing some positive results so I thought I’d share what I’m doing in case you find yourself feeling the same way.

The bottom line is that we’re never going to make new friends if we don’t put ourselves out there and, as introverted as I can often be, even I have made new friends by giving that a shot. I hope you’ll be successful with it too!

If you’re in Orlando and looking for a fun way to spend time with some new friends, try the Orlando Park Crawl! In OKC? No problem! The OKC Selfie Scavenger Hunt is a great group activity!

27 thoughts on “Making Friends as an Adult: Why is it so difficult?”