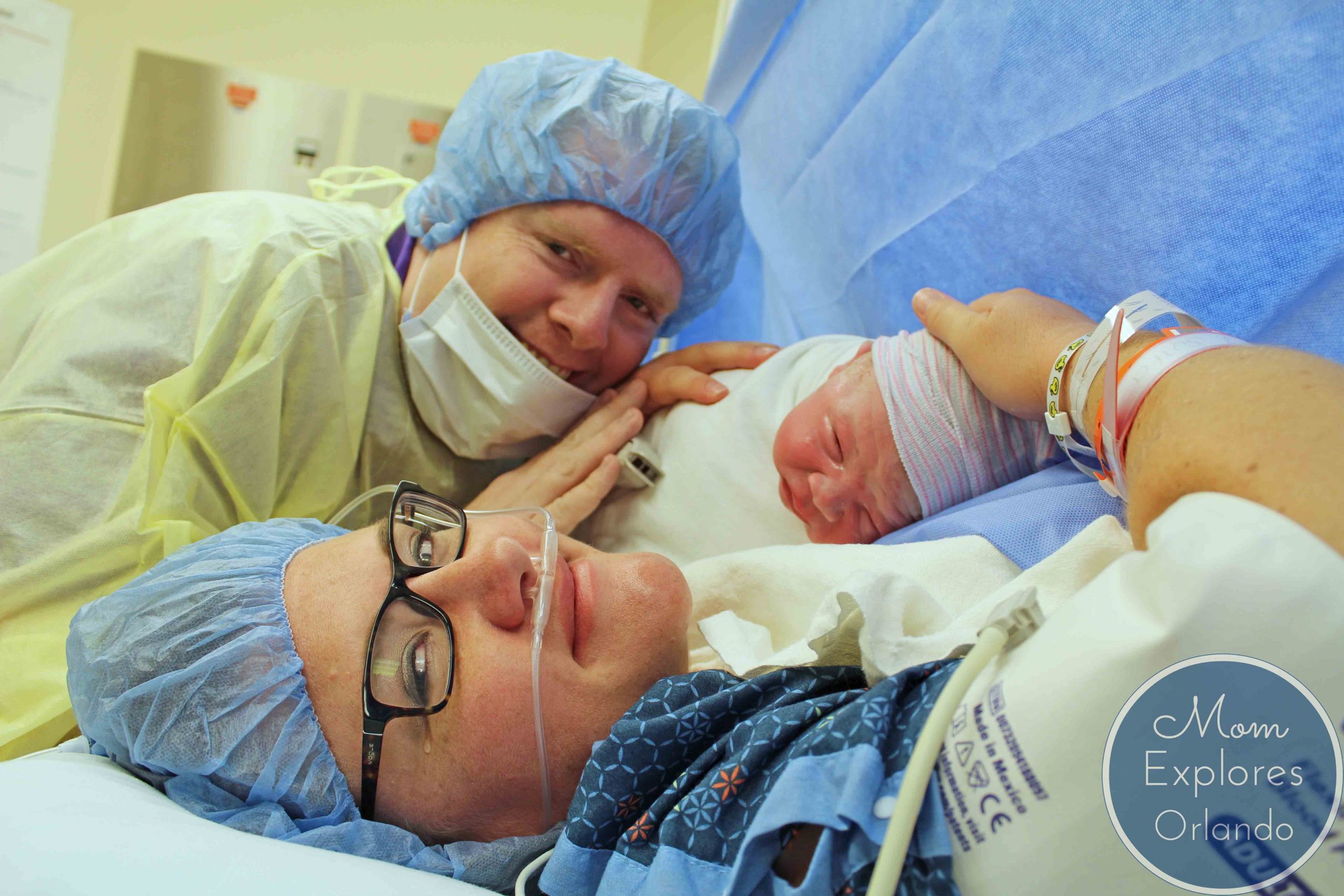 Just like we did for Graham, I wrote Foster a letter to tell him his birth story, and I’m sharing it with y’all below. Once we’re back in a schedule I’ll plan to share my questions (and their answers) about having a repeat c-section since there was so much I didn’t know and couldn’t find online, but for now I hope you’ll enjoy reading about how our newest addition came into the world!

“Relaxed” and “routine” are the two words that come to mind when I think back on your birth. Going in, I wasn’t sure I would have much to write about. Things were straightforward and simple. I felt a little bad that you wouldn’t have a “mom’s water broke at the grocery store” kind of birth story.

Despite the scheduled nature of your birth, it was still a beautiful day and worth remembering every detail. The day began a little early for Daddy. He was super excited and a little anxious, so when he woke up around 5:00 he just stayed up and watched TV. Somehow, I was able to sleep until my alarm went off at 7:00. I showered with my special antimicrobial soap that the doctor gave me and did my hair and makeup – I wanted to look nice when I met you and I wanted to try to look as “normal” as possible when Graham came to the hospital to visit because I didn’t want to scare him. Daddy got himself and Graham breakfast before showering and Noni came over about 8:40. Time felt like it was passing very quickly as Daddy loaded the car with our bags and we took some pictures with Graham. I cried as we were leaving, not because I wasn’t super excited to meet you, but because there was such a mix of emotions going on in my mind. I didn’t get to play “choo choo” with Graham before we left like he wanted me to and it still breaks my heart a little bit that I didn’t have time for that, even though I know he’ll never remember. We stopped at Publix to pick up your birthday newspapers, but they didn’t have the Sentinel! So, we bought the New York Times and USA Today and went down the road to the Racetrac to buy gas and see if they had the Sentinel (they did!).

When we arrived at the hospital, we checked in to Labor and Delivery and a nurse took us back to a room. We thought there would be a lot of sitting around because we had to get there two hours early, but there was surprisingly a lot to do. The nurses had me get into a gown, put monitors on me so we could hear your heartbeat (such a sweet sound every time!) and check my contractions, gave me my hospital bracelets, and hooked up my IV. The IV hurt pretty badly again this time (just like it did with Graham) because of where they put it (in the side of my wrist, of all places!). But at least they got it right the first time.

I remember seeing a birthing ball and some other similar but strangely-shaped contraption hanging in the bathroom when I went in to change in my robe. I felt a little bit sad that I wouldn’t be delivering you the old fashioned way, but at the same time I was grateful that everything was so relaxed. After I answered what seemed like a million questions for the nurses, the anesthesiologist and the nurse anesthetist (Adam) came in to talk me through the anesthesia and ask if I had any questions. After we saw our doctor and she filed her paperwork, we were ready to roll! A nurse helped me get into a wheelchair and took me back to the operating room while Daddy got dressed in his cap and gown.

It was a strange ride to the OR because I knew that I had been to the same place before, but I couldn’t remember anything about what I was seeing from Graham’s birth. It was nice to be so aware this time. I didn’t want to miss a thing.

Once we were in the OR, the first thing anyone asked me was what type of music I wanted to listen to. I thought this was a little bit odd, since music was the last thing on my mind, but I said whatever the doctors preferred would be fine with me. Then Adam said “well, what type of music would you like your baby to be born to?” and that got me a little bit. I didn’t really think much and I just said “Zac Brown Band” and that it would probably be what your Daddy would choose. Apparently I was the second surgery of the day and the first also requested ZBB! Daddy liked that I chose that music and he thought it was really cool that “Chicken Fried” was playing at the moment you were born.

The nurse leader came in to the OR and stood in front of me, wearing her cap, gown, and mask. She held my shoulders and tried to warm me up a bit (the OR was VERY cold) while Adam prepped me for the spinal. The spinal felt very similar to the epidural when it was going in (it’s just one shot instead of a catheter being placed for continuous anesthesia) but the effects were very different. I would later be so grateful that the spinal was much more long-lasting than the epidural – especially when it came time for the fundal “massage”. Once the anesthesia was injected, my legs started to go numb right away. This made me feel better about the surgery because I was a little worried it might not be as effective as the epidural and I would feel them cutting me open. I was able to feel movement, but my legs felt tingly and heavy and there was no way I could move anything below my waist by myself. I did feel them putting in the catheter (it was uncomfortable, but not painful) and that was about it.

After I was numb, the doctor came in and began the surgery. Daddy wasn’t in the room just yet, but they brought him in very quickly after the surgery started. I was glad to see him because I was definitely feeling the side effects of the anesthesia. Adam warned me that I might feel a bit nauseous and that my chest might feel heavy because of my blood pressure dropping from the anesthesia, so I told him when this did happen and he was able to fix it almost instantly. Our doctor told us that it would probably be a slower surgery than it was with Graham because they’re super careful the second time to make sure they’re safe with the scar tissue and surrounding organs. When we were getting ready to go to the OR, Daddy asked if they would break my water before the surgery. I told him they wouldn’t and he asked how they got all of the fluid out “do they just use a Shop-Vac?” We laughed a little when we heard some serious suction going on after I was cut open. About 10 minutes after the surgery began, I felt tugging (though it didn’t hurt at all) and pressure and then I heard you cry. I smiled and thought you sounded just like a little duck. You were born at 12:38 PM, weighing 8 lb 13 oz and measuring 20.5” long. Daddy went over to the warmer to cut your umbilical cord and take a couple pictures, then he came back to show me while they cleaned you up. It was fun to see the pictures, but I just wanted to see YOU! When they brought you to me I couldn’t help but cry happy tears. I was able to hold you for several minutes before Daddy took you out of the OR while I was closed up and it was wonderful. You felt so tiny and you looked so different from Graham. You were a very handsome baby and you had HAIR!

While the doctor stapled me together, I asked Adam some random questions about anesthesia and what other types of surgeries people were awake for. Then we got to talking about teaching (he thought I was in the medical field because of my questions, but I told him I was a history teacher before I had kids and he said his entire family was in education).

Before I knew it, they were wheeling me back to the recovery area. A few minutes later, Daddy came in and I was able to do skin-to-skin and nurse you. You latched on right away – you were a champ! The fundal massage wasn’t nearly as bad this time (it still hurt, but it wasn’t unbearable) thanks to the spinal, so I was able to enjoy my time with you. After Graham’s nap, Noni brought him to the hospital to meet you. We wanted him to be the first to meet you, so Daddy went out into the hallway to get him and brought him back. He was SO excited to see you. Daddy put him on the bed with me, thinking we would chat for a few minutes about his day with Noni, but the first thing he said was “I hold Baby Foster?” It melted my heart. I hope you both love each other so much as you grow up together. He gave you a gift (your baby blue Mickey) and you “gave” him a gift (a new Razorback hat). It was so fun to see him get excited about the gift exchange. The rest of our time in the hospital was pretty routine. We had (mostly) good nurses and we just tried to enjoy our time with you. Noni, PaPa, Gramicela, Aunt Debbie, PeePaw, Courtney, and Aunt Terrie all came to visit. We finally went home on Friday and you screamed almost the entire way. You’ve definitely been a little fussy, but overall you’re a joy. When we got home, there was a special message from Graham and Noni. It was a fun surprise! The doctor was happy with your weight gain after we went back for a weight check following your 2 week appointment (you were almost back to your birth weight at 8 lb 9 oz) and we were told to carry on until your 2 month appointment! You do have a slight tongue tie, but we were told that it would be better not to clip it. More pain during nursing for me, but we’ll do what we need to do!

During your second week home you caught the cold that Graham had and it made me so nervous and sad for you. We took you in to the doctor on Saturday and he told us that you were going to be just fine, which made me feel much better.

As you’ve gotten older, you’ve become much more aware – opening your eyes, looking around at us, and wanting to be awake more. But you still love your sleep and you prefer to nurse to sleep just like your brother did. We can’t wait to watch you grow into a little person and see you play with your brother. The usual milestones of smiling, rolling over, and crawling will be so sweet to see! We love you so much, Foster!!

Here are some of the amazing photos my very talented sister took of us!